This is the eleventh changelog (and the last in 2020) for Knurling-rs, our push to sustainably build better tooling for developing and debugging Rust software for embedded systems. Knurling-rs includes a suite of tools that make it easier to develop, log, debug, and test your embedded Rust libraries and applications! 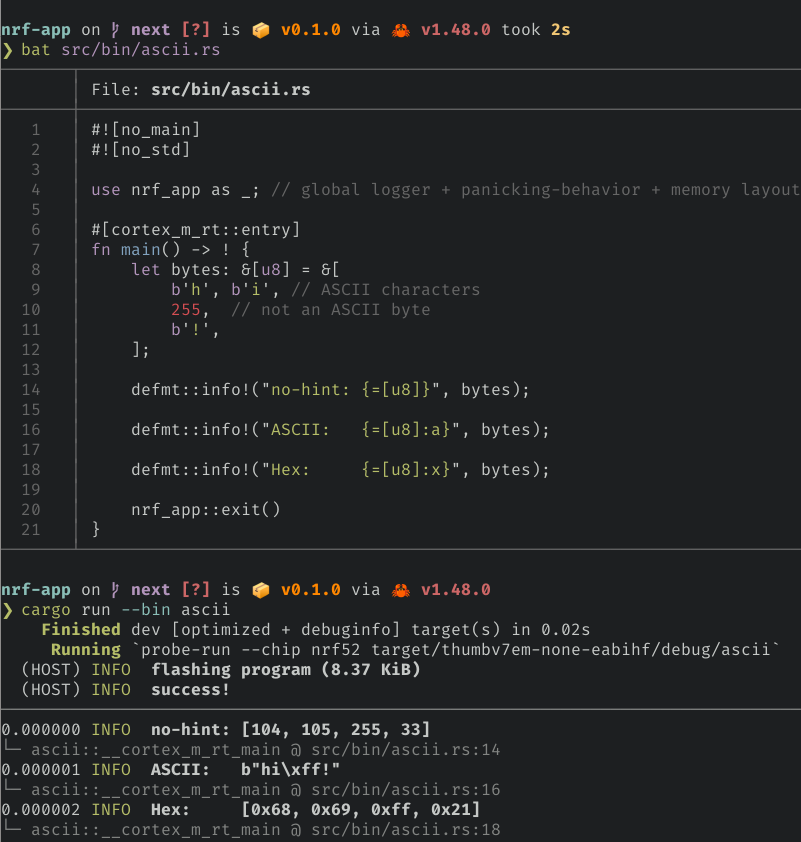 ⚠️ Note that this update is currently git version only; it will land in the defmt v0.2 crates.io-release as it is a breaking change. If you're using the git version of defmt you will have to adjust your codebase after updating!

We've added display hints as described in defmt RFC #270 in #313. With display hints, you can specify the format in which to display the data you're printing.

This breaks the current defmt prining syntax (but is now aligned with std Rust formatting)– instead of : types are now prefixed with =, and the display hints start with :

You can also combine display hints with bitfields:

The easiest way to try the git version of defmt is to use the next branch of our Cargo project template, app-template.

With defmt v0.1.x published on crates.io only getting bugfix updates and the defmt git version v0.2 getting breaking API changes, we've decided to host to versions of the defmt docs:

https://defmt-next.ferrous-systems.com will host documentation for the git version of defmt with all of its breaking changes from now on

Due to illness, there will be no new knurling-sessions content until January 11, 2021. We've already re-structured our approach to the next sessions project to mitigate situations like these in the future. Thank you for your understanding.

The following changes are now available in the git version of defmt, and will be included in the upcoming 0.2 crates.io release:

Just a reminder: the knurling team will be taking a break during the last two weeks of 2020 so this is the last changelog post of 2020. We'll be back, fully recharged, on the week of January 4, 2021.