With logging frameworks like defmt, "printf debugging" is a powerful and easily accessible tool to figure out why your code is behaving differently than expected. However, sometimes you might still want to use a debugger like gdb, for example if you're spelunking through an unknown codebase or you don't quite know yet what to look for. This post explains how you can have both at the same time.

probe-run sits at the core of the knurling tooling. It lets you cargo run programs on embedded hardware and prints the device's defmt logs to the console. probe-run paired with the defmt-test test harness lets you run unit tests on the embedded target via cargo test. However, probe-run (v0.2.x) doesn't support GDB (more about that at the end of this post) so you cannot debug the programs you cargo run or cargo test.

It has been possible for a long time to debug embedded Rust programs with GDB and, these days, extensions like cortex-debug (VS code) ease the process of setting up a GDB session and provide a graphical interface to interact with the debugger. What most people don't know is that it is possible to get defmt logs out of an embedded program while you step through it using GDB. That's what we'll demonstrate in this blog post.

This post covers the process of setting up debugging for our app-template using an external GDB server program without losing the defmt logs.

As an example, we'll use

NOTE: The full source code for the example covered here can be found on GitHub.

We've configured an app-template to build code for the nRF52840 DK using the recommended setup steps. The name crate has been set to app. In addition to that the src/bin folder has been removed and the main application lives in src/main.rs.

Let's look into the GDB setup next.

In VS code, the debugger configuration goes in the .vscode/launch.json file. The example repository contains said file with two "launch configurations". The first launch configuration, 'Flash & Debug', specifies how to flash the firmware and set up a GDB server. We won't explain what the JSON fields mean in this blog post (you can refer to the cortex-debug docs for details) but if you want to adjust that file for different hardware supported by OpenOCD you'll need to adjust lines 15-34

Once that file is in place you can start a new debugging session from the VS code menu: 'Run > Start debugging' (shortcut: F5). This should pick up the 'Flash & Debug' launch configuration; if it doesn't select it from the drop down menu in the 'Run and Debug' sidebar (shortcut: Ctrl+Shift+D). This launch configuration will flash the microcontroller and run the program until it reaches the main function.

The picture below gives you an overview of cortex-debug debugging interface. When you start the debugging session the program will be halted at the start of the main function. There's also a GDB console if you prefer to write GDB commands over the graphical interface. 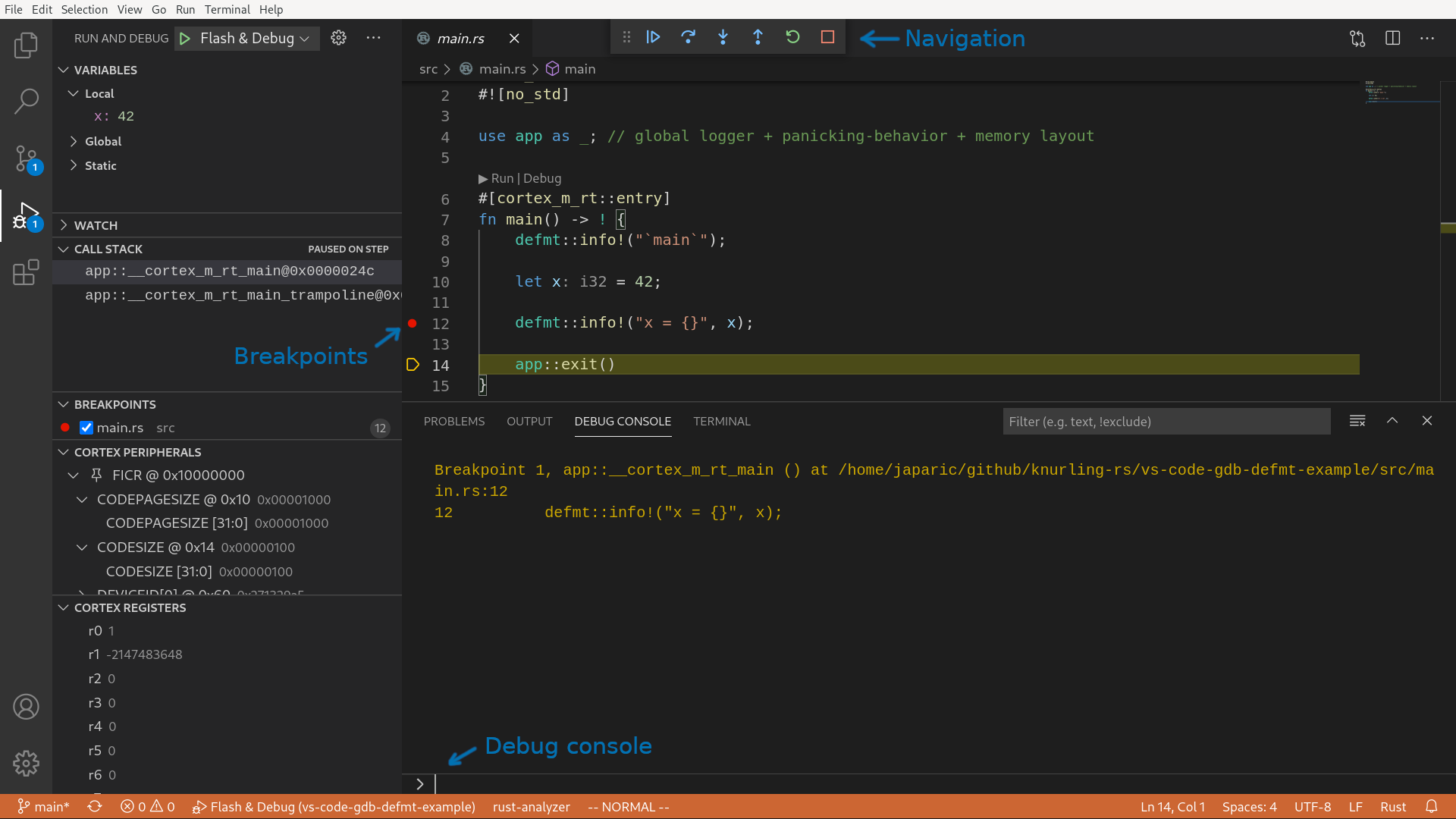 With that JSON file the debugger is in place but there are no defmt logs yet. To print those logs you'll need to get the defmt data out of the device, decode it and then print it to the console. defmt-print, another knurling tool, handles the last 2 steps: it decodes defmt data from standard input and prints the logs to the console, using the same format as probe-run.

To get the RTT (defmt's default transport) data out of the device we can use OpenOCD's RTT support. Here's how:

You can get the location of the of the RTT control block with these commands.

With that in place, start a new debugging session (with F5). While the program is halted in main run this command a in VS code terminal:

NOTE: nc is the netcat program, which reads data from a TCP port and prints it to the standard out

That command will block; leaving that terminal running in the background.

Now, as you step through the code using the debugger you'll see defmt logs in the output of the defmt-print command. This is demonstrated in the intro video.

You are probably curious about having to enter the memory location of the RTT control block in .vscode/launch.json. Does one need to update that line if the program changes? The answer is yes.

Packing it into an xtask

Having to manually update the memory location of the RTT control block is quite inconvenient so let's automate that with an xtask. If you are not familiar with the concept of xtasks: they are a pattern for adding project-specific subcommands to Cargo.

The example repository contains a GDB xtask that roughly executes the following commands.

Is probe-run no longer necessary?

This GDB + defmt-print setup is not replacement for probe-run. You can still, and in my opinion should, use probe-run in your project. The example project is configured to use probe-run: cargo run --bin app will run the app with probe-run and cargo test -p testsuite will run unit tests on the embedded target with probe-run.

This VS code launch configuration is for when you need a debugger. If you structured your embedded project with testing in mind you may be able to find and fix many issues via testing on the host before you even put code on the embedded target. That way the debugger is left for those tricky cases where the hardware is not doing what it's supposed to be doing due to e.g. silicon bugs or bugs in the Hardware Abstraction Layer (HAL). Also, sometimes it's easier to step through third party code that has no logs with GDB than it's to source patch it to add logging functionality.

For example, you could send the defmt data over a (virtual) serial port if your version of OpenOCD doesn't support RTT. On unix systems, serial ports appear as files under the /dev/. To print the defmt logs you can invoke this command from the xtask:

We have demonstrated how to add GDB support to the knurling app-template. The advantages of this setup over the stock app-template are:

We'd love to provide a GDB server with probe-run. That would make debugging as simple as passing a --gdb flag to probe-run (e.g. in .cargo/config.toml) to start the GDB server. Then attaching a GDB client could be done with the 'Attach Debug' launch configuration in VS code or directly with the gdb program.

GDB functionality is already available in probe-rs, the library that probe-run uses for flashing and other probe related operations, but as of v0.10.1 probe-rs doesn't support a GDB server and RTT data transfers running concurrently. RTT is the defmt transport protocol used in probe-run; for that reason we don't expose GDB support in probe-run. Concurrent operation of GDB and RTT is available in the git version of probe-rs so we are looking forward to integrate that into probe-run when that's available on crates.io.

In our experience, the GDB server implementation in probe-rs is not quite as mature as OpenOCD: for example, breakpoints work but stepping operations do not work reliably. We'd love to see great GDB support in probe-rs as well as better performance for the flashing operation. To make that happen you can fund the probe-rs project via GitHub sponsors and/or contribute to the project on GitHub.